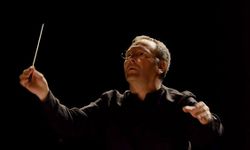 Ramon Garcia i Soler (b. 1971, Atzeneta d'Albaida, Valencia, Spain) is a Spanish composer, conductor and guitarist.

Soler studied guitar at the Superior Conservatory of Music "Óscar Esplá" in Alicante with José Tomás, attending courses with David Russell, Leo Brouwer and José Luis González, among others. Later, he also graduated in composition under the guidance of Joan E. Canet, while attending different seminars on band conducting, music education and music for the cinema.

As a composer he has written more than 80 works, addressing a large number of genres and styles, music for the image, orchestra, instrumental group, chamber, band, making recordings for different record labels.

His works have been performed by renowned groups from Spain, Cuba, Argentina, the United States, the Netherlands, Belgium and Japan. It is worth highlighting the awards obtained, including the award in the I Memorial Font de Anta processional march composition contest in Seville and the two 2008 Euterpe awards, for best recording and composition, as well as the recent Hollywood nomination, Music in Media Awards, for his concerto for marimba and orchestra.

He has been the principal conductor of several choirs and bands, among which the Unión M. de Albaida "L'Aranya" from 1996 to 2003, the Sociedad M. "La Pau" de Beneixama from 2004 to 2007, the Atrivm Symphony Orchestra and the Ateneu M. de La Vila Joiosa and, in addition, has also been a guest conductor in numerous bands in the Valencian community, receiving recognition as a composer in different cities.

He has been president of the ACMMIC, and associate professor of the Department of Musicology of the Superior Conservatory of the Balearic Islands. He is currently a teacher at the Professional Conservatory of Music d'Ontinyent and at the Department of Band Direction of JM de la Vall de Albaida, activities that combine with the direction of the Agrupaciació Musical Sta. Cecilia de Ador and the Ateneo Musical de Cocentaina.