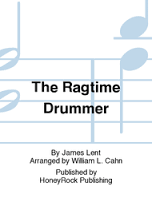 James Lent was the percussionist/trap drummer at the Hippodrome Theater (N.Y.), circa 1911-16. Solos such as The Ragtime Drummer were regularly featured in the theater programs of the early 1900s as they were an ideal vehicle for allowing the theater orchestra musicians of the era to "show their stuff" and were popular with audiences as well.