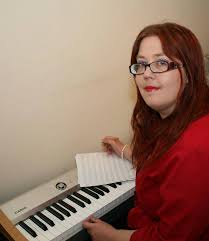 Rachael Forsyth (b. 1982) is a British saxophonist and woodwind player who teaches, composes, and arranges.

Her saxophone playing started when she was 13 years old prior playing the piano, an instrument she later returned to during her late teens. After graduating from Middlesex University in the summer of 2005 with a BA (Hons) in music, she began working as an active musician and music teacher.

Despite being classically trained Rachael has a deep love for jazz and pop music. She is an experienced session musician as well as working regularly in orchestral pits for shows.

Rachael was first bitten with the composing bug once she'd graduated from university. She saw her first orchestral commission performed in 2011, and she was lucky enough to be able to conduct the orchestra as well. Since then Rachael has been writing many educational pieces. She also works on more contemporary styled pieces for ensembles of all shapes and sizes. Rachael is known for her ability to blend different styles to create music that is hauntingly beautiful and yet powerful in its message. In 2012 she won a commission with the Donne in Musica foundation to tour Italy with one of her solo saxophone works and has been shortlisted for numerous compositional awards.

As a passionate teacher Rachael loves to write music she knows her students will enjoy. She has been running her own publishing company for the last four years and publishes her own books. She has seen more of her compositions performed over the last two years and is set to have more performed and published later this year. Her influences include the great Tower of Power and other classic soul and funk bands as well as other saxophonists like the great Gerry Mulligan, Lock Jaw Davis and, of course, Charlie Parker.