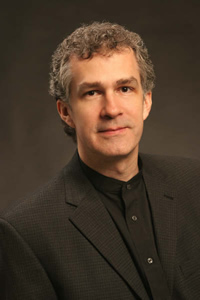 The sun god Ra was the most important god of the ancient Egyptians. Born anew each day, Ra journeyed across the sky in a boat crewed by many other gods. During the day Ra would do battle with his chief enemy, a serpent named Apep, usually emerging victorious, though on stormy days or during an eclipse, the Egyptians believed that Apep had won and swallowed the sun.

Ra! is a rather aggressive depiction of an imagined ritual of sun worship, perhaps celebrating the daily battles of Ra and Apep. There are four ideas presented in the movement: 1) a "skin dance" featuring the timpani and other percussion, 2) a declarative, unison melodic line, 3) a layered texture of pulses, and 4) sun bursts and shines. The movement alternates abruptly between these ideas, as if following the precise dictates of a grand ceremony.