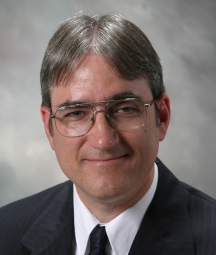 R. Mark Rogers (b. January 1955) is an American composer, arranger and conductor.

Dr. Rogers has degrees from Texas Tech University and the University of Texas.

As managing editor for Southern Music Company, he is the author of editions of the music of Percy Aldridge Grainger and John Philip Sousa that have entered band repertory worldwide. He is also widely published as an arranger and transcriber, with performances by all five of the Washington, D.C. service bands.

Dr. Rogers is on the adjunct faculty of San Antonio College, Texas Lutheran University, and Trinity University. Prior to coming to San Antonio, Dr. Rogers was on the faculty of the University of South Alabama and a staff member of the University of Texas Longhorn Band. He has guest conducted numerous community and professional bands, regional honor bands and orchestras, and is an active clinician for area high school and middle school bands and orchestras.

He is the conductor of the Heart of Texas Concert Band in San Antonio.