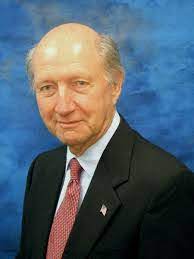 Col. Collins graduated from The Citadel in 1953 with a Bachelor of Science degree. Immediately after entering the Air Force as a second lieutenant, his illustrious Air Force career included opening the Air Force Academy in 1955 as an air training officer, aide to the four-star commander-in-chief of U.S. Air Forces in Europe, to being shot down by the North Vietnamese Army and spending 7-1/2 years as a POW in prison cells in and around Hanoi. He was released in 1973.

Quincy retired as a full colonel in 1974, ran for Congress in the 7th District of Georgia in 1974 and again in 1976. He has since been involved in insurance, was the general sales manager for 4½ years at Arnold Palmer Cadillac and was president of his own marketing firm in Charlotte. For 22 years he has been a commercial and industrial real estate broker and is now [2021] senior vice president of Southern Real Estate in Charlotte.

Quincy Collins was reported to have been a music major at the University of South Carolina and drum major of the marching band. His best known for his composition of P.O.W. Hymn from prison while a prisoner of war of the North Vietnamese in Hanoi in 1971.