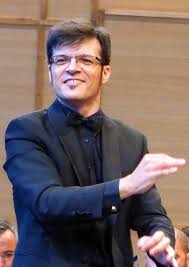 Polifemo was written in 2000 and it was commissioned by the Town of Valencia, Spain, as a compulsory piece for the "Certamen Internacional de Bandas Ciutat de Valencia" for its 2001 edition. Ever since, Polifemo has become a staple of the Spanish literature for band, receiving countless performances and at least 15 commercial recordings.

Polifemo has a duration of about 14 minutes. It uses a standard Spanish band setting, including flugelhorns, optional cello and double basses, as a well as a large percussion set, with some special instruments like a jug, conch-shell or ocean drum.

Later in 2006, Andrés Valero would write an extended version of the work, dedicated this time to the City of Córdoba's Symphony Orchestra, called "Polifemo and Galatea". The setting for winds would appear in 2010. It has a duration of about 22 minutes. Both versions are edited by Piles.

The present work is inspired by Polyphemus, one of the most ancient myths ever known to mankind. Since the Greek and Roman times there have been two quite different positions for this character, one which is related to Ulysses in Homer's Odyssey, and the other -the one we are mainly concerned with-that tells us about Polyphemus' unhappy love affair. Among all the authors that have dealt with this subject, it was Ovidio who has contributed most in his Metamorphoses. Later, in the sixteenth and seventeenth centuries, this topic was a favorite for many Spanish and Italian poets. The brilliant "The myth of Polyphemus and Galatea" by Luis de Góngora is an outstanding example.

After this brief account of the origin of the plot, let us see what the story for this composition is about.

First we have a view of the beautiful Sicilian coast, the place where the action takes place. Next, a point in the vast landscape catches our eye. It is Cyclops' home, a mysterious dark cold cave. Inside we find a fierce clumsy one-eyed giant who walks around heavily as he plays the panpipes and shows off this misshapen figure. However, this dreadful shock that Polyphemus first causes us soon changes into loving tenderness towards beautiful Galatea. A love which was never returned will turn fondness into mortal jealousy and hatred towards shepherd Acis, who is finally slaughtered by the desperate and frustrated lover. It results in tragedy. In spite of everything, love, the true love that binds Acis and Galatea's souls will triumph for ever, for the blood he hashed is turned into water from an everlasting spring by the grace of God.