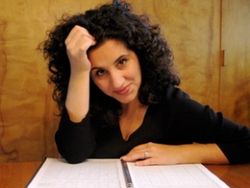 Points of Departure is a 15-minute song cycle, performed without pause, that uses the theme of different modes of travel as a unifying factor through the voices of four different personae.

The first character is the travel agent. We catch the agent during a day at the office; the phone keeps ringing, and she has to deal with some rather difficult customers. In the second movement, we hear from a teenage girl who is about to take her driver’s license test. The third movement begins with an amateur pilot musing on famous female pilots who died tragically young, but achieved incredible goals at an early age. The final movement features a cruise ship entertainer. Working as a musician on a cruise ship seems like it would be a fun, glamorous job, until one thinks about the extreme working conditions. Singers can bank on singing several shows every night, rehearsing during the day, and living for weeks in close quarters with a roommate they may or may not enjoy. While their audiences are there to enjoy themselves, singers are hard at work, away from home for weeks or months at a time, basking in the spotlight when time allows.

Points of Departure was premiered by the West Point Band on March 12, 2010, at the College Band Directors National Association Eastern Division convention in West Chester, Pennsylvania.