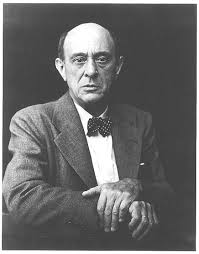 This work bears the designation Opus 21.

“Read the preface, looked at the poems, am delighted. Brilliant idea, just my kind of thing,” noted Arnold Schönberg in his diary, after hearing of the actress Albertine Zehme’s plans to set Dreimal sieben Gedichte aus Albert Girauds Pierrot lunaire to music. Originally, Zehme had been thinking of a work for a spoken voice with a piano accompaniment, but Schönberg did not want his composer’s imagination to be limited by this. Zehme, who commissioned the piece, agreed, and each of the 21 miniatures was given its own sound colour by the instruments employed: flute, clarinet, piano, violin and cello. The world première in 1912 apparently required 25 rehearsals.

The work is written for reciter (voice-type unspecified in the score, but traditionally performed by a soprano) who delivers the poems in the sprechstimme style accompanied by a small instrumental ensemble. Schoenberg had previously used a combination of spoken text with instrumental accompaniment, called "melodrama", in the summer-wind narrative of the Gurre-Lieder, which was a fashionable musical style popular at the end of the nineteenth century. Though the music is atonal, it does not use Schoenberg's twelve-tone technique, which he did not first use until 1921.

Pierrot lunaire is among Schoenberg's most celebrated and frequently performed works. Its instrumentation – flute, clarinet, violin, cello, and piano with standard doublings and in this case with the addition of a vocalist – is an important ensemble in 20th- and 21st-century classical music and is referred to as a Pierrot ensemble.

The piece was premiered at the Berlin Choralion-Saal on October 16, 1912, with Albertine Zehme as the vocalist. A typical performance lasts about 35 to 40 minutes.