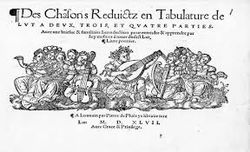 Pierre Phalèse is the French version of the name of Peeter van der Phaliesen, Latinised as Petrus Phalesius (c. 1510, Leuven, Belgium – c. 1575, Leuven) who was a Flemish bookseller, printer and publisher.

Nothing is known of his early training, but Phalesius started a bookseller business in 1545 and soon set up a publishing house. By 1553 his press was printing his own high-quality output from movable type. After his death, his publishing house flourished in Antwerp into the seventeenth century under the direction of Petrus the Younger's daughters Maria and Magdalena. Phalesius was the principal publisher of music active in the sixteenth-century Low Countries.

While the Phalesius press published a number of literary and scientific works such as Gemma Frisius' De radio Astronomico & Geometrico liber, it is mainly known for its publications of music. By 1575 the Phalesius press had published about 180 music books. The majority of Phalesius's output is dedicated to sacred music—masses, motets and magnificats—the rest being a mix of French chansons, Italian madrigals, Flemish songs and instrumental works. Vocal and instrumental works are both represented. Because Phalesius put out a number of lute publications during the early years of his activity, some music historians believe that he may himself have played the lute.