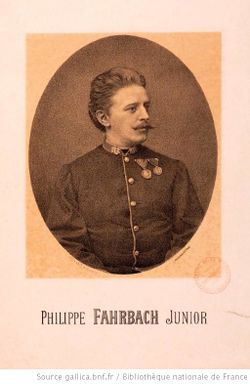 Because his father was a famous conductor, Philipp Jr. was referred to as "young Fahrbach." His father gave him thorough music instruction, and when he reached the age of 12, his father allowed him to conduct his orchestra.

In 1860, he enlisted in his father's regimental band and became his assistant. Together with his father, he left the regiment in 1865 to play in his father's newly formed orchestra. Five years later, he went to Madrid to conduct a series of concerts. Returning to Vienna, he saw no opportunity to organize an orchestra of his own because of Johann Strauss' domination of the music scene. He therefore joined the 23rd Regiment and soon became one of the leading musicians in Budapest. He then served with several other regiments and was granted special leave to conduct in Paris and Munich. He left the army in 1884.

Until his death in1894, Philipp Fahrbach, Jr. was a highly respected conductor and interpreter of Viennese music in Paris, Berlin, and Madrid, as well as in Vienna. He was a prolific composer, his fame exceeding that even of the Strauss family for a time, leaving behind approximately 500 compositions (125 polkas, 105 waltzes, 60 marches, and mazurkas, quadrilles and other dance forms, many of which are still popular in Austria and Germany.