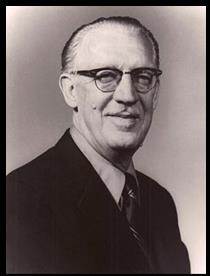 Lang received his early education at St. Agnes Academic School in Rockville Center, New York, and at Oceanside (New York) High School. He received a Bachelor of Science degree from the Patrick Conway Band School [now Ithaca College] and took graduate studies at Columbia University and the Juilliard School of Music. Early in his career, he performed for numerous music organizations around New York City and became involved in scoring Broadway musicals. He was also arranger for radio station WOR.

During World War II, Lang served his country in a dual capacity; he was in charge of the Music Consultant Division of the Office of War Information and was leader of the U.S. Maritime Band at Sheepshead Bay, Brooklyn, New York.

Following the war, he continued orchestrating. He was immensely successful and was orchestrator of 60 musicals, including such big hits as Hello Dolly, My Fair Lady, Camelot, Annie Get Your Gun, Fanny and Li’l Abner. He also arranged for concert band, publishing over 100 arrangements in addition to his original works.

Much of Lang’s work found its way into television and motion pictures and appeared on major recording labels. In recognition for his many achievements, he was awarded an honorary Doctor of Music degree from Ithaca College in 1983 and given an honorary promotion to commander at the U.S. Merchant Marine Academy in 1977. He was elected to the American Bandmasters Association in 1953.

Mr. Lang was known as the “dean of American orchestration” because of his considerable contribution to the American musical theater, his arrangements of many other works, and for his original compositions.