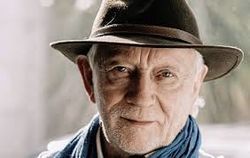 He was awarded the Gold Badge from the British Academy of Songwriters, Composers and Authors in October 2009.

He began his career as a songwriter while studying at Queens University in Dublin. He soon went to work for entrepreneur Philip Solomon, writing music for leading bands and singers. In 1967, Coulter joined with Bill Martin to produce a series of pop hits, including the Eurovision theme, Puppet on a String. When his partnership with Martin ended in the late 1970s, Coulter turned his attention to orchestral recordings.

Coulter’s career as a producer, arranger, songwriter, and performer is remarkable because it included styles from folk and orchestra music to pop.

Coulter has amassed 23 platinum discs, 39 gold discs, 52 silver discs, two Grand Prix Eurovision awards; five Ivor Novello Awards, which includes Songwriter of the Year; three American Society of Composers, Authors and Publishers awards; a Grammy Nomination; a Meteor Award, a National Entertainment Award and a Rose d'or d'Antibes. He is one of the biggest record sellers in his native land.