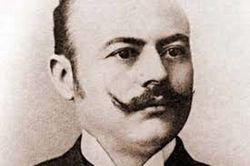 Pedro was the son of the military, legislator and general politician Jacinto Gutiérrez and Sofía Ana Hart. He completed his first studies at the Santa María de Caracas School. The director of that institution at that time was the wise Venezuelan Agustín Aveledo, who would remember several years later frequently finding the future musician and composer, abstracted, creating his first melodies. When he turned 15, despite the opposition of his parents, Gutiérrez began studying music under the direction of maestro Trino Gil and later at the Academy of Music of the National Institute of Fine Arts of Caracas. At 16 years old he wrote his Triumphal March to Mary that has since been played in Venezuelan temples. After the death of his parents, he established himself in his musical studies, mastering the double bass and practically all the string instruments.

At 19 he premiered his first musical work, entitled Symphony, in the Municipal Theater of Caracas; the president of the republic at that time, Juan Pablo Rojas Paúl, attending the concert offered him a scholarship winner to study on the European continent. However, Gutiérrez declined the scholarship so as not to leave his widowed mother alone. This act gained him two prizes by the Venezuelan government: the "Bust of the Liberator" and the "Medal of Public Instruction", being one of the youngest people to whom these honors have been awarded.

He began his professional activity as a musician in the Martial Band of the Federal District, today known as Banda Marcial Caracas, as a bassist in 1901; he became director of the band for the period between 1909 and 1946. For that band he wrote countless transcriptions and adaptations. One zarzuela of the many that he composed gave him worldwide fame through one of his pieces: the joropo Alma Llanera of the zarzuela of the same name. Among his creations also stand out Geraneo, his great waltz composed in 1903, and Pan American Mass premiered at St. Patrick's Cathedral in New York.

As a composer he cultivated the genre of zarzuela and waltz, although his musical scope was much broader: Pedro Elías Gutiérrez was a famous band director and a virtuoso of double bass.