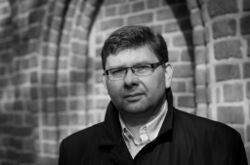 Paweł Łukaszewski (b. 19 September 1968, Częstochowa, Poland) is a Polish composer and conductor of choral music.

Paweł Łukaszewski's father was the composer Wojciech Łukaszewski. He is the brother of the composer Marcin Łukaszewski. He is a graduate of the Fryderyk Chopin Music Academy in Warsaw, where he studied the cello (with Andrzej Wróbel, diploma in 1992) and composition (with Marian Borkowski, an honours diploma in 1995). He has been on the faculty of the Fryderyk Chopin University of Music since 1996 [as of 2022], holding a Ph.D. in composition and the title of Professor. In 2016 he was elected Vice-Rector. He worked as a visiting professor in Chile and Argentina (2003, 2006).

According to David Wordsworth, Dr. Łukaszewski is the best-known Polish composer of his generation in and out of Poland "by far." According to Polish music scholar Adrian Thomas, "Paweł Łukaszewski [is] best known for his resolutely anti-modern sacred choral music." His music has appeared on four CDs that have won a Fryderyk Award As the conductor of musica sacra he has won the Fryderyk Award three times.

In recent years Paweł Łukaszewski’s music has gained a high recognition in Britain. His works have been performed (and some premiered) by such renowned choral ensembles as The Holst Singers, BBC Singers, Trinity College Choir, Tenebrae, Britten Sinfonia and Polyphony under the direction of prominent conductors Stephen Layton and Nigel Short.