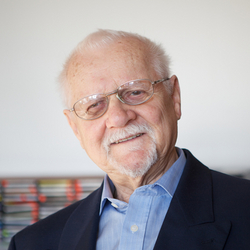 Pavel Stanĕk (b. 3 June 1927, Prague, Czechoslovakia) is a Czech composer and conductor.

Stanĕk studied at the Prague Conservatory, and in 1950 began his career in the Staatliche Lieder und Tanz Ensemble, first as a bass violinist, and for one year as director of the chorus. In 1954, he became director of the band of the Department of the Interior, which today is the Burgwache Orchestra. In 1964-1965, Stanek was director of the Na Fidlovàece music theater. Concurrently, he led the orchestra and chorus at the Schwer Machine Factory CKD Praha.

A turning point in his career came in 1963, when he became chief conductor at the Ostrava radio station. He retained this position until his retirement in 1990. Stanek served this station as music director, dramatic producer, arranger, and composer. He was guest conductor of many bands in northern Moravia, Austria, and Germany.

His style of composition is drawn from many sources - Bohemian and Moravian folk music, modern popular styles, serious contemporary music including experimental techniques, as well as the music of previous periods. He has combined all of these stylistic elements into his own distinctive expressive melodic style and included jazz and pop elements, his own mastery of instrumental color and orchestration in his prolific musical creations.