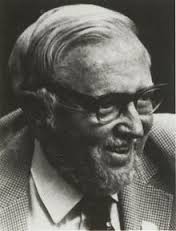 Yoder was the youngest of four sons and two daughters. His home environment was scholarly as well as musical — both parents were graduates of Indiana University. After moving with his family to Grand Forks, North Dakota, where his father was a member of the university faculty, Paul began a lifelong association with percussion instruments by taking lessons on a drum pad while he was in the sixth grade. A short time later he became a member of the junior high school band, directed by Leo M. Haesle. He later added to his high school and university music experiences (and income) by playing drums in a local theater orchestra for silent films — until the advent of the sound cinemas in 1928. While attending the University of North Dakota, Yoder also benefited from the opportunity of serving as student conductor of the band, directed by John Howard. He was a Phi Beta Kappa scholar and valedictorian of his class when he received a BA degree in journalism at the University of North Dakota in 1930. In 1941 he received a Master of Music degree from Northwestern University and in 1958 was awarded an honorary doctorate of music from his first alma mater, the University of North Dakota.

Yoder played percussion in the Rochester (Minnesota) Park Band during the summer of 1930. The band was conducted by Harold Cooke, an excellent musician, who gave the young drummer his first lessons in harmony. Yoder subsequently taught instrumental music in the schools of West Aurora, Illinois, and Evansville, Indiana, until 1936. Realizing the need for more playable school band arrangements and original works to supplement the many transcriptions of that era, he then moved to Chicago to become a full-time composer-arranger and began to meet that need. He also contributed his service to the Midwest International Band and Orchestra Clinic in Chicago for more than 40 years. During World War II (1943-1945), Yoder was a member of the U.S. Army bands at Fort Slocum and Fort Hamilton, New York. Later he guest-conducted bands of all levels, presented clinics, and adjudicated band festivals throughout the U.S. and many other countries.

While Yoder was president of the American Bandmasters Association in 1963-1964, he helped to install the ABA Research Center at the University of Maryland and led the move to establish the scholarly Journal of Band Research. By 1984 he had contributed articles to nine issues of the journal. In his unofficial role as “The Roving Ambassador of Band Music,” Yoder made numerous trips to Europe and (from 1965) also worked with the band programs in Japan (and learned the language) during 13 visits to that nation. From 1974 to 1982 he was a visiting professor of music at Troy State University. He then retired to Pompano Beach, Florida — and later to Hendersonville, North Carolina — but remained active in a number of organizations, including the ABA, Windjammers Unlimited, and WASBE [World Association of Symphonic Bands and Ensembles]. He was the principal speaker at the latter organization’s planning session at Manchester, England, in 1981 and also at the first official conference at Skien, Norway, in 1983.

Yoder received many honors, including the Goldman Citation from the ABA, the Distinguished Service Music Award from Kappa Kappa Psi, and the AWAPA Award from the National Band Association. In 1983, while he was in Minnesota to guest-conduct the Chatfield Brass Band — which was celebrating the 50th anniversary of his first publication and the 75th year of his birth — Governor Rudy Perpich declared a statewide Paul Yoder Day. Two years later the John Philip Sousa Foundation awarded Yoder the Sudler Order of Merit, and in 1986 he was elected to membership in the Windjammers Unlimited Hall of Fame. After one of his many rehearsals as a percussionist with the Windjammers Band in Sarasota, Florida, Yoder casually mentioned to a new snare drummer that he “played pretty well for his first time.” During the rehearsal intermission Yoder learned that the new drummer was Buster Bailey, who had just completed 40 years with the New York Philharmonic Orchestra.

In 1983, William D. Revelli wrote of Paul Yoder, “No composer has contributed more to the school band movement. For more than 50 years, he has appeared as composer, clinician, conductor, lecturer, arranger, toastmaster, author, and friend to millions in the United States and many foreign countries. He gave totally and unselfishly of himself.”

John Paynter described Yoder as a “giant among giants, a great man, and a wonderful friend.” Near the end of his life, Yoder requested that a Dixieland band play at his funeral and that instead of flowers, friends should contribute to organizations such as the ABA, ACB, Chatfield (Minnesota) Music Lending Library, Kappa Kappa Psi, and Windjammers Unlimited.

After writing his first publication, Our Family Band, in 1933, Paul Yoder composed and arranged over 1,400 published band works—over 1,150 are listed by Loren Geiger in Vol. 16/No 1 of his Boombah Herald (BBH). Yoder’s pieces were published by over 100 firms in the U.S., England, Germany, Japan, and the Netherlands. His College Songs for School Band books sold more copies for many years than any band collection ever printed. Because he was concerned that band directors would “get tired of seeing his name so often,” Yoder used a number of pseudonyms, including the following: Palmer Clark, Frederick Griggs, Lester Guthrie, Carl Norton, Charles Porter, Allan Rader, James A. Scott, Max Thomas, and Al Van Buskirk. Among his most popular concert works are: Anacapri, Flamenco, Haskell’s Rascals, Mountain Majesty, Pachinko, Relax, Rumbalita, Shrine of Democracy (chorus and band), Southern Cross, and Tin Pan Gallery (written as a musical companion to Tin Pan Galley, a cookbook written by the composer’s late wife, Roselyn). His most popular marches include Alpha and Omega (medley of familiar march and concert melodies), Bristol, Chicago Rockets, Circus Parade, Down Beat, Exalted Ruler, Expo ‘70, Firehouse Special, First Federal on Parade, Hail to the Varsity, Holland Brass, Make Way for the Army, Minstrel Jamboree, Mr. Circus, Silver Anniversary, and Virginia Beach.