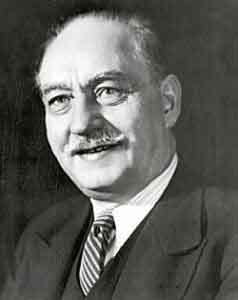 Carl Emil Paul Lincke (7 November 1866, Berlin - 3 September 1946, Clausthal-Zellerfeld, Germany) was a German composer and conductor. He composed a significant number of marches, but he was best known in the early part of this century for his operettas, which differed enough in style from the Viennese genre to warrant the designation ‘Berlin operetta.’

Lincke was born the son of August and Emilie (Schubbel) Lincke. His father was a painter and an assistant to a local magistrate. He attended a private Lutheran school and later studied at the music school in Wittenberge, where he played for a time in the town band. He showed a deep interest in music from childhood and made rapid progress in his study of violin and bassoon. He later learned to play piano, horn, and percussion instruments. After completing his music school requirements, Lincke applied for a position in a military band but was rejected because of his slight build—referred to as schmalbrustigkeit (narrow chested). He then began playing with various local dance orchestras and small ensembles, an experience which he later credited for much of his success in the light-music field.

Lincke’s conducting career began in 1890 as kapelimeister of the Parodie Theater in Berlin. He also led the orchestra at the Ostend Theater where he met a 16-year-old singer named Anna Muller; a year later they were married. Additional conducting experience was gained at the King’s State Theater, and in 1893 he was appointed conductor at the Apollo Theater, the largest in Germany. Short operettas were alternated with variety shows at the Apollo, and Lincke began to assume more and more responsibility for writing new arrangements and original compositions. After establishing his own highly profitable publishing business, named for the Apollo Theater, he moved to Paris in 1897 to conduct at the famous Folies Bergère Théâtre. He was extremely successful in his new position and also very popular with the young ladies in the theater—a factor in his subsequent marriage breakup. Lincke returned to Berlin in 1899; he conducted again at the Apollo Theater in 1900-1901 and at the Metropolitan Theater in 1910-1911. Between those dates he continued composing and also traveled to numerous cities in Europe and America to conduct and to create an interest in his own compositions, many of which were published by his Apollo-Verlag. After receiving a number of honors, Lincke left Berlin in 1943 (during World War II) to live for a time in Czechoslovakia and later in the German state of Bavaria.

Lincke is credited with over 500 published works, including at least 40 marches and 33 operettas. A decade after his death in Clausthal-Zellerfeld in 1946, the West German Government issued a postage stamp in his honor which showed an excerpt from his Berliner Luft Marsch.