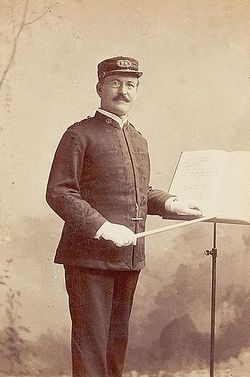 Patrick Sarsfield Gilmore (25 December 1829, Ballygar, Ireland - 24 September 1892, St. Louis, Mo.) was an Irish-born American composer and bandmaster who lived and worked in the United States after 1848.

As a boy, he attended public school and was apprenticed to a wholesale merchant in Athlone as a clerk. His passion for music conflicted with the mercantile life, so he became music instructor to the young sons of his employer. He was a member of an amateur band in Althone and later enlisted in a regimental band that visited Canada in 1848.

Gilmore immigrated to the United States at the age of 19, landing in New York City on October 16, 1849. Two days after his arrival in Boston, he was in charge of the instrumental music department at the John P. Ordway store, a large Boston music store. To promote the publications of that firm, he organized a minstrel company known as Ordway's Aeolian Vocalists. He first achieved prominence as a cornet soloist with that group. He became one of America's best E-flat cornet soloists and also conducted and led the Suffolk Brass Band, the Boston Brigade Band, the Salem Brass Band, and the Charleston Band. It was during the Civil War that Gilmore wrote the tune that became When Johnny Comes Marching Home.

While leader of the Salem Band, Gilmore originated 4th of July concerts on the Boston Common, and today the concerts are still a tradition. He also presented a series of concerts with the Salem Band in the Boston Music Hall, and this was the first time an American band had been recognized as a legitimate indoor concert organization. In 1858, he formed Gilmore's Band in Boston. When the Civil War broke out, he attached his band to the 24th Massachusetts Volunteers. Later, Governor John A. Andrews authorized him to reorganize all of the military bands in the state of Massachusetts.

In June, 1867, Gilmore conceived the idea of celebrating the end of the war with a gigantic musical festival, The National Peace Jubilee. The project was discouraged on all fronts, but on June 15, 1869, before an audience of 50,000 in the Boston Coliseum, Gilmore mounted the podium to face an orchestra of 1,000 and a chorus of 10,000. The first note was accompanied by the firing of cannons (electrically) and the ringing of all the church bells in Boston. Thus began what was the greatest popular music festival on record to that time.

Gilmore's next project was even more grandiose, the World Peace Jubilee of 1872, which included an American orchestra of 2,000 and a chorus of 20,000. Participation of foreign bands was solicited for in letters written to foreign governments by President Grant. Housing the Peace Jubilee was a coliseum, erected at the cost of $500, 000. It seated 100, 000 people. The Jubilee began on June 17, 1872, and when it concluded 18 days later, the grateful citizens of Boston presented Gilmore with two gold medals and a check for $50,000.

In 1873, Gilmore accepted an offer to become the leader of the band of the 22nd Regiment of New York. He reorganized the band and presented approximately 600 concerts in Madison Square Garden (then known as Gilmore's Garden). It later became the most popular resort in New York City.

On July 4, 1876, Gilmore produced a mammoth National Concert at Independence Square in Philadelphia, followed by 60 concerts in the main Exposition Building at the Centennial Exposition. In 1878, he took his band to Europe, performing concerts in Holland, England, France, Belgium, and Germany. The band also played 14 consecutive Manhattan Beach seasons, all of which were highly successful.

Gilmore composed very few works. Among them are The Voice of the Departing Soul (Death's at the Door), and the national song Columbia. His song Good News from Home, written in 1854, attained world-wide popularity, as did When Johnny Comes Marching Home, for which he used the pseudonym Louis Lambert on several editions of the sheet music.

The Gilmore Band Library, later made available to the public, included many of the arrangements and transcriptions that were used by the Gilmore Band. Almost all the works were adapted and arranged by others; very few were arranged by Gilmore himself.