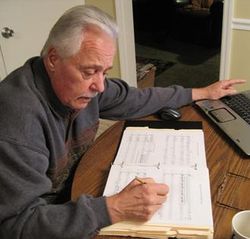 Spino began studying piano at age seven and continued keyboard studies throughout undergraduate college. At age eight he composed his first composition, Wind Song, for solo piano which has, unfortunately, been lost. Spino received a BA teaching degree in music education from Rowan University in 1964. Coincidental with the start of his teaching career Pat studied composition with Stanley Austin and privately with Vaclav Nelhybel in New York City. The experience with the dynamic Nelhybel solidified Pasquale’s commitment to further serious study of composition for the concert stage.

Upon graduation from Rowan in 1964 he began his long, sometimes interrupted, tenure as a Philadelphia, Penn., and New Jersey public school music teacher at the junior and senior high school levels.

Spino’s American Snapshots was selected by Vincent Persichetti for publication by Elkan-Vogel of Philadelphia when the composer was 19 years old.

Among his composition awards, Spino’s Symphony No. 1 won the 6th annual Indiana State University Contemporary Music Festival Prize, a festival now in its 51st year. He is presently retired, living in southern New Jersey where he self publishes his many works and sails in his “spare” time.