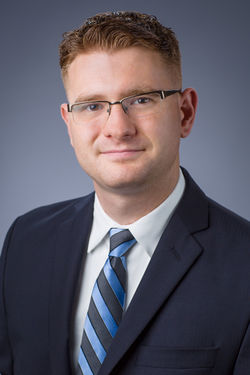 Parker Gaims (b. 1989, Los Angeles, Calif.) is an American clarinetist and composer.

Mr. Gaims received his Bachelor of Music in clarinet performance from DePaul University and his Master of Music, also in clarinet performance, from Northwestern University. His clarinet teachers include Steven Cohen, Julie DeRoche, Larry Combs, J. Lawrie Bloom, Wagner Campos, and Geoff Nudell. His composition teachers include Drs. Kurt Westerberg and Fredrick Gifford. He has been a member of “The President’s Own” United States Marine Band since September 2013.

As a clarinetist, Mr. Gaims has performed at the Kennedy Center Millennium Stage, Wolf Trap, Strathmore, the White House and other venues throughout the D.C. metropolitan area. Before living in D.C., he performed with the Chicago Chamber Musicians and served as the bass clarinet teaching assistant at the Brevard Music Festival in North Carolina. Recently, he was a featured guest soloist with the DePaul University Wind Symphony in Wayne Oquin’s Tower Ascending with Dr. Erica Neidlinger conducting.

He won the Kleinman Composition Competition in 2010.