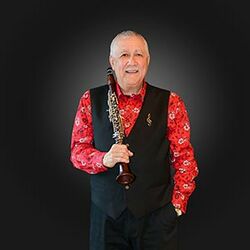 Mr. D'Rivera's father played classical saxophone, entertained his son with Duke Ellington and Benny Goodman records, and he sold musical instruments. He took D'Rivera to clubs like the Tropicana (frequented by his musician friends and customers) and to concert bands and orchestras.

At age five, D'Rivera began saxophone lessons by his father. In 1960, he attended the Havana Conservatory of Music, where he learned saxophone and clarinet and met Chucho Valdés.] In 1965, he was a featured soloist with the Cuban National Symphony Orchestra. He and Valdés founded Orchestra Cubana de Música Moderna and then in 1973 the group Irakere, which fused jazz, rock, classical, and Cuban music.

By 1980, D'Rivera had become dissatisfied with the constraints placed on his music in Cuba for many years. In early 1980, while on tour in Spain, he sought asylum with the American Embassy, leaving his wife and child behind, with a promise to bring them out of Cuba.

Upon his arrival in the United States, D'Rivera found great support for him and his family. Paquito was introduced to the jazz scene at some prestigious clubs and concert halls in New York. He became something of a phenomenon after the release of his first two solo albums, Paquito Blowin' (June 1981) and Mariel (July 1982).

Throughout his career in the United States, D'Rivera's albums have received reviews from critics and have hit the top of the jazz charts. His albums have shown a progression that demonstrates his extraordinary abilities in bebop, classical and Latin/Caribbean music. D'Rivera's expertise transcends musical genres as he is the only artist to ever have won Grammy Awards in both Classical and Latin Jazz categories.