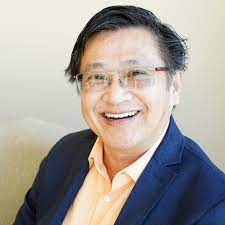 P.Q. Phan (b. 1962, Vietnam) is a Vietnam-born American composer and educator.

Dr. Phan became interested in music while studying architecture in 1978 and taught himself to play the piano, compose, and orchestrate. In 1982, he immigrated to the United States and began his formal musical training. He earned his BM from University of Southern California and his DMA in Composition from University of Michigan, where he also earned a second master’s degree in ethnomusicology.

His recorded works include Tragedy at the Opera, Nights of Memory for solo guitar and a CD titled Banana Trumpet Games.

He recently completed A Vietnamese Requiem, a 35-minute large-scale work for four vocal soloists, eight-part chorus and chamber orchestra, which employs Vietnamese Buddhist text. This work is dedicated to the approximate 10 million Vietnamese victims of wars in the 20th century. His most recent chamber opera What the Horse Eats on the Vietnam’s 1945 Great Famine was set to receive its premiere this August 2021.

A frequent guest composer and lecturer in Asia, P.Q. Phan is professor of music in composition at Jacobs School of Music, Indiana University. He had taught at University of Illinois at Urbana Champaign and Cleveland State University.