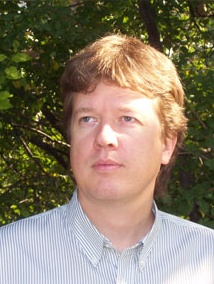 Péter Tóth (b. 1965 Budapest) is a Hungarian composer.

In secondary school he studied percussions and composition from Oszkár Schwarcz and Miklós Kocsár. Later he was admitted to Liszt Ferenc Music Academy. He graduated in 1990 from Emil Petrovics’s class.

After graduating from the Academy of Drama and Film in Budapest he worked as a sound engineer, music director.

He has composed music for film and theatre productions both in Budapest and country towns. He also gave lessons at the University of Theatre and Film Arts in Budapest. He has won a number of awards including Erkel Prize in 2007, KÓTA Prize in 2009 and in 2013 He was awarded Bartók-Pásztory Ditta Prize.

His numerous choral pieces have won national and international awards.

In 2009 he founded Kontrapunkt Music Publishing with Kata Daróczi.

At present he is full member of Hungarian Academy of Arts the Dean of the University of Szeged, Faculty of Music.