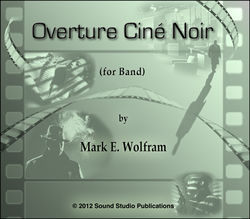 Overture Ciné Noir (for Band) is a musical homage to the Film Noir era of the 1940s and 1950s. With its low-key black-and-white palette, stark and smokey lighting style and long shadows, Film Noir has its roots in German Expressionist cinematography. Many of the prototypical stories and much of the attitude of classic film noir is derived from the hardboiled school of crime fiction that emerged in the United States during the Great Depression. This composition reflects the high drama of these films with the exposition and development of exciting action-driven themes of mystery and romance. With sweeping melodies and dark harmonic material, "Overture Ciné Noir" moves through a series of musical vignettes, always maintaining its introspective and brooding nature. If your concert theme is "movies" this composition would make a wonderful feature on your program!