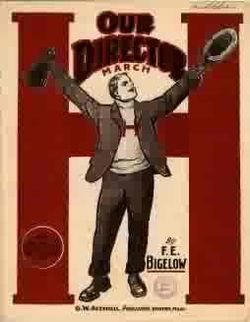 Here's one of the most famous marches of all time, ready for bands at the medium-easy level to enjoy! It is bright, crisp, exciting and playable all the way. You'll enjoy the tuneful melodies in 6/8 time, and with the arranging skills of James Swearingen, and you can be sure your band will enjoy a successful performance. Attention to details such as articulation and dynamic contrasts make this a simply outstanding edition for developing bands.

Bigelow composed this march in 1892 for Joseph Morrisette, the director of the Ashland Brass Band. In addition to his arrangement for band, which Jean Missud published in 1895, editions were soon issued for guitar, banjo, mandolin, flute, cornet, cello, and orchestra.

In 1916, the trio of Our Director became the fight song of Harvard College. It has since been adopted by numerous schools -- in quick time as a fight song or slowly as an alma mater. It was widely used in vaudeville and silent films (as a curtain raiser and as exit music), and it was even sung as the Battle song of Liberty during World War I. Bigelow obviously knew the right ingredients for a good march as well for a good prescription.

- Notes from “Program Notes for Band”