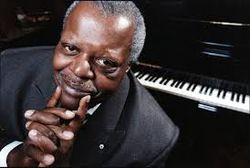 Peterson was born to immigrants from the West Indies. He grew up in the neighbourhood of Little Burgundy in Montreal. It was in this predominantly black neighborhood that he encountered the jazz culture. At the age of five, Peterson began honing his skills on trumpet and piano, but a bout of tuberculosis when he was seven prevented him from playing the trumpet again, so he directed all his attention to the piano. His father, Daniel Peterson, an amateur trumpeter and pianist, was one of his first music teachers, and his sister Daisy taught him classical piano.

As a child, Peterson studied with Hungarian-born pianist Paul de Marky, a student of István Thomán, who was himself a pupil of Franz Liszt, so his early training was predominantly based on classical piano. But he was captivated by traditional jazz and boogie-woogie and learned several ragtime pieces. He was called "the Brown Bomber of the Boogie-Woogie".

At the age of nine Peterson played piano with a degree of control that impressed professional musicians. For many years his piano studies included four to six hours of daily practice. In 1940, at fourteen years of age, he won the national music competition organized by the Canadian Broadcasting Corporation. After that victory, he dropped out of the High School of Montreal, where he played in a band with Maynard Ferguson. He became a professional pianist, starring in a weekly radio show and playing at hotels and music halls. In his teens he was a member of the Johnny Holmes Orchestra. From 1945 to 1949 he worked in a trio and recorded for Victor Records. He gravitated toward boogie-woogie and swing with a particular fondness for Nat King Cole and Teddy Wilson. By the time he was in his 20s, he had developed a reputation as a technically brilliant and melodically inventive pianist. During his most productive period, he worked primarily in duos, trios and quartets.

Peterson was called the "Maharaja of the keyboard" by Duke Ellington, simply "O.P." by his friends, and informally in the jazz community as "the King of inside swing". He released over 200 recordings, won eight Grammy Awards, and received numerous other awards and honours. He is considered one of the greatest jazz pianists, and played thousands of concerts worldwide in a career lasting more than 60 years.