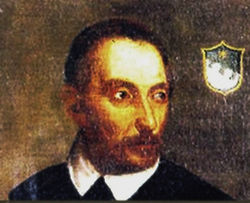 Orazio (or Horatio) Vecchi (baptized 6 December 1550, Modena, Ital - 19 February 1605 Moderna) was an Italian composer of the late Renaissance. He is most famous for his madrigal comedies, particularly L'Amfiparnaso.

Vecchi studied theology and music and later took Holy Orders. He served as maestro di capella in several cathedrals, including the one at Modena. In 1604, Vecchi was dismissed from his duties at the Cathedral for disregarding orders from the bishop to refrain from conducting music at the convent. In addition to a number of sacred works, Vecchi also composed several secular pieces.

Vecchi was renowned for his madrigals, especially his grouping of them together in a new form called the "madrigal comedy." This was a light, popular, and dramatic entertainment form of the late 16th century, sometimes regarded as one of the precursors to opera.

In addition, Vecchi published books of canzonette, a lighter alternative to the madrigal, midway in complexity and seriousness between it and the villanella. He also composed serious madrigals, though not in the quantity of composers like Marenzio, as well as some sacred music. The sacred music in particular shows the influence of the Venetian school, with polychoral writing as well as contrasting duple- versus triple-time sections.