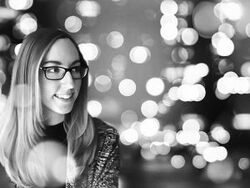 Dr. Davis grew up in Eugene, Oregon, where she began her studies in violin performance at the age of nine years old. She attended the University of Oregon, receiving her B.M. in violin performance and composition in 2013. Olivia studied violin performance with Kathryn Lucktenberg, and composition with David Crumb, and Robert Kyr. In her last year of studies at the University of Oregon, Olivia began playing viola, studying with Leslie Straka. During her undergraduate studies, she co-founded the Ova Novi Ensemble (ONE) whose mission is to perform works by women and women-identifying composers.

Olivia continued her education in 2014 at the University of Texas at Austin where she received her M.M. in composition, studying composition with Yevgeniy Sharlat, Donald Grantham, Russell Pinkston, Dan Welcher, and viola with John Largess, violist of the Miró Quartet. She was a founding (and current) member of the prismatx ensemble, a group whose mission is to combine visual arts with new music, collaborating with living artists.

Olivia graduated from the University of Michigan, receiving a D.M.A. in composition in August, 2020. Her dissertation titled, Liminal: Work for Orchestra and Optional Projected Images is an interdisciplinary work consisting of an original musical composition for orchestra and original artwork created by the composer with the option for live projection. Her dissertation received the Rackham Graduate Student Research Grant to perform and/or mock up using the world-class samples libraries of Orchestral Tools Berlin Orchestra.

During Olivia's time at the University of Michigan, she was the recipient of the Rackham Merit Fellowship and the Regents Fellowship, and taught as a Graduate Student Instructor of composition. She studied composition with Evan Chambers, Kristin Kuster, Erik Santos, and viola with Yizhak Schotten. In 2019–20 she was the Young Composer-in-Residence for the Detroit Chamber Winds & Strings (DCWS), and as part of her residency was commissioned to write works for reed trio and trombone quartet which premiered during the 2019–20 season in Detroit.

As a performer and composer, Olivia has taken part and been featured in multiple festivals, including the Gabriela Lena Frank Creative Academy of Music as the Arnold and Babette Salamon Fellow; The Next Festival of Emerging Artists as principal violist; and the Oregon Bach Festival Composers Symposium in which she served as principal violist for the American Creators Ensemble.

Dr. Davis is an accomplished visual artist, and continues to be an active performer, performing and premiering colleagues’ works as well as her own.