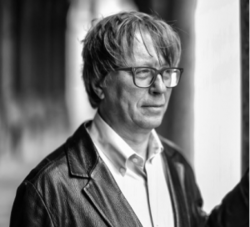 Subtitle: For 8 Trombones
This work may be found under its title in German, Octet für acht Posaunen.

The Octet was written for the eight trombonists of the Trombone Unit Hannover, a well-established ensemble in northern Germany. Octet is dedicated to his wife, Mollena Williams, and has a duration of 20 minutes. Its premiere took place at the Basel Munster in Switzerland on September 11, 2015.

My involvement with audiotapes played by Giacinto Scelsi entailed a surprising realization: that melodies -- singable melodies in the traditional sense -- are also possible in the smallest micro-intervallic steps. The comparatively rough transcriptions of Scelsi’s works, most of which are notated no more precisely than in quarter tones, made this quality of the music unrecognizable. (Unfortunately, the tapes are all but inaccessible to the public). As with my Ninth String Quartet and my piece for solo trumpet I Can’t Breathe. I am also attempting to compose micro-melodies in my Octet for eight trombones, almost didactically approaching quarter tones and sixth tones up to eighth-tone steps, which must be intonated meticulously. The piece is composed for a space with a long reverberation time. The musicians must stand closely together so they can hear themselves precisely. The work is not conceived as a polyphonic tissue; rather, it is a largely homophonic mass of sound, only occasionally splitting up

Commissioned by the Trombone Unit Hannover.