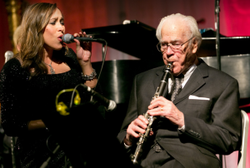 Dr. Leyden graduated from Yale University in 1938, attended Pierre Monteux's Domaine Musicale in Hancock, Maine, in 1961, and earned a master's (1965) and doctoral degree (1968) from Columbia University (where he also taught for several years).

He began his professional music career playing bass clarinet for the New Haven Symphony Orchestra while attending Yale. Leyden joined the United States National Guard in 1940 for a planned year of volunteer work and enlisted as an infantry sergeant on February 24, 1941, in New Haven, Connecticut. During World War II he served in the Army Air Force for five years.

While Leyden was serving as a master sergeant in Atlantic City and rehearsing music, Glenn Miller heard Leyden perform. Miller said to him "For a Yale man, you don't play bad tenor". Miller called on Leyden in September 1943 to conduct the Moss Hart Army Air Force spectacular "Winged Victory". Leyden also served as one of three arrangers for Miller's Air Force Band. In 1943, Leyden composed the theme music for the wartime radio series I Sustain the Wings with Glenn Miller, Chummy MacGregor, and Bill Meyers. The radio program ran from 1943 to 1944. Leyden also arranged for the reorganized Glenn Miller Orchestra of Tex Beneke. In August 2000, he led the Air Force Falconaires of the Air Force Band of the Rockies in a PBS television special, Glenn Miller's Last Flight.

Between 1956 and 1959, he was musical director for Arthur Godfrey's radio program. He also worked as musical director on The $64,000 Question (including writing the theme music), and as the musical director of The Jackie Gleason Show, originally called You're in the Picture (1961). He also organized the Westchester Youth Symphony in White Plains, New York, in 1957 (an organization he led until 1968). As a staff arranger at RCA Victor he composed and arranged music for Disney and other musicals including Cinderella, Alice in Wonderland, 20,000 Leagues Under the Sea, Winnie the Pooh, Peter Pan, and Pinocchio. Leyden also conducted and arranged for many well-known artists including Tony Bennett, Rosemary Clooney, Don Cornell, Vic Damone, Johnny Desmond, The Four Lads, Johnny Hartman, Gordon MacRae, Mitch Miller, Ezio Pinza, Frank Sinatra, Jeri Southern, and Sarah Vaughan.

Leyden moved to Portland, Oregon, in 1968 to take over the Portland Youth Philharmonic (then the Portland Junior Symphony) while long-time conductor Jacob Avshalomov went on sabbatical. He also joined the music department at Portland State University. He began his longstanding relationship with the Oregon Symphony in 1970 as associate conductor. This lasted for 29 seasons plus 34 seasons as conductor of the Oregon Symphony Pops.] In May 2004, he retired and was honored with the lifetime title laureate associate conductor. Leyden also served as the music director of the Seattle Symphony Pops for eighteen seasons, and as conductor of the Indianapolis Symphony Orchestra's Prairie Pops for eight seasons. He also conducted the Chappaqua Orchestra as its second music director before moving to the West Coast..