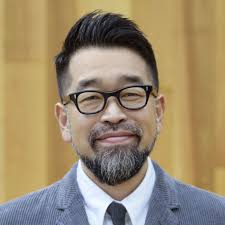 Noriyuki Makihara, nicknamed Mackey, (b 18 May 1969, Takasuki, Japan) is a Japanese pop singer-songwriter.

Makihara made his debut to the J-Pop scene in the early '90s after performing on a televised song competition program. He made a name for himself with the release of songs such as Mou Koi Nante Shinai and Donna Toki mo, both of which, among several others, are covered to this day by current popular artists

Much of his music's lyrical content has revolved around the subject of romantic love, though themes of profound joy, reminiscence, gratitude and deeper spiritual aspects of the human condition have become predominant in recent years.

In addition to creating songs for his own music career, he has written, produced and performed songs for many other artists, the most notable being SMAP's Sekai ni Hitotsu Dake no Hana. He is ranked at No.84 in a list of Japan's top 100 musicians, provided by HMV. He was also invited to write the song The Gift for English band blue in their album Guilty.

In 2003 he gained fame by composing the number Sekai ni Hitotsu Dake no Hana (The One and Only Flower in the World) which was recorded by Japanese boy band SMAP and sold double millions.