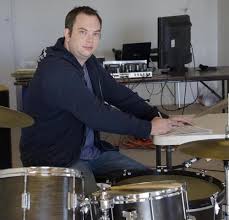 Nolan Stolz (b. 1981) is a composer, music theorist, and percussionist/drummer from Las Vegas.

Stolz has a unique compositional voice in the contemporary classical music world, one that is clearly influenced by his performance background in jazz fusion and progressive rock, yet firmly rooted in the contemporary classical tradition. His compositions have been performed throughout the United States, Canada, South America, and across Europe, including several national and international festivals and conferences. Stolz has been commissioned by the Alturas Duo, CCSU Chamber Players, Synchronix, LVA Jazz Ensemble, Las Vegas Music Festival Orchestra, SUNY-Stony Brook, and several solo performers. His compositions may be heard on releases from Six Strings Sounds, Ablaze and Tributary Music.

Stolz has won several awards, including the Max DiJulio Composition Prize for Haystacks for orchestra, and was the winner of the Vox Novus/Composer’s Voice Dance Collaboration Competition for Remnants of Bullfrog, Nevada for fixed electronic media and dance. Stolz has published articles and given papers on his own compositions, microtonal music, theory-composition pedagogy and jazz improvisation pedagogy at several regional, national and international conferences.