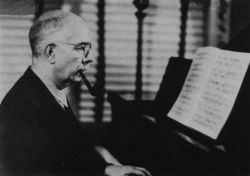 New Dance is the third movement of a trilogy entitled Ballet for Band premiered by the Humphrey-Weidman Group in 1935. Although the composer cast it in various arrangements, it is the band setting of New Dance which has proven the most popular.

Beginning with a Copland-esque fanfare, the piece is built on an asymmetrical two-measure ground bass reminiscent of rumba and conga rhythms. Over this basso ostinato and a persistent sixteenth-note pattern, a model melody is heard in successive variations of orchestration. This reliance on short motivic elements of strong rhythmic character is a feature of all Riegger's music and is reflected in the fragmented form of New Dance, each statement of the theme being concluded by a brief "rhetorical flourish" before immediately resuming I another section of the ensemble.

Besides being an outstanding composition, New Dance serves as an excellent introduction to the many other works of Wallingford Riegger. It is hoped that this unfairly neglected composer will eventually receive the attention that he so well deserves.