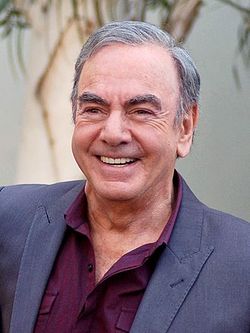 Neil Leslie Diamond (b. 24 January 1941, Brooklyn, N.Y.) is an American singer-songwriter and actor.

Diamond grew up in several homes in Brooklyn, having also spent four years in Cheyenne, Wyoming, where his father was stationed in the army. In Brooklyn he attended Erasmus Hall High School, a classmate of Barbra Streisand

For his 16th birthday, he received his first guitar. Diamond spent a number of weeks at Surprise Lake Camp, when folk singer Pete Seeger performed a small concert. Seeing the widely recognized singer perform, and watching other children singing songs for Seeger that they wrote themselves, had an immediate effect on Diamond, who then became aware of the possibility of writing his own songs. Diamond also used his newly developing skill to write poetry.

Diamond next attended New York University as a pre-med major on a fencing scholarship. He began cutting classes and taking the train up to Tin Pan Alley, where he tried to get some of his songs heard by local music publishers. In his senior year, when he was just 10 units short of graduation, Sunbeam Music Publishing offered him a 16-week job writing songs for $50 a week, and he dropped out of college to accept it.