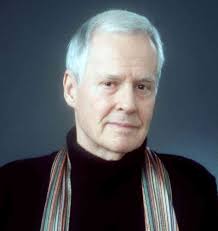 Rorem showed an early interest in and talent for music. He received his early education at the University of Chicago Laboratory Schools and the American Conservatory of Music.He studied at the Curtis Institute and the Juilliard School of Music and studied privately with Virgil Thomson, for whom he was a copyist.

From 1952 through 1958, Rorem worked in Paris. After returning to the United States, he has earned most of his income from his compositions. From 1980 to 1986, he served on the faculty of the Curtis Institute.

Rorem was raised as a Quaker and refers to this in interviews in relation to his piece A Quaker Reader, which is based on Quaker texts.]

In 1966 he published The Paris Diary of Ned Rorem, which, together with his later diaries, has brought him some notoriety. He has written extensively about music as well. These essays are collected in the anthologies Setting the Tone, Music from the Inside Out, and Music and People. His prose is much admired, not least for its barbed observations about such prominent musicians as composer and conductor Pierre Boulez. Rorem has composed in a chromatic tonal idiom throughout his career, and he is not hesitant to attack the orthodoxies of the avant-garde.

In 2005 Rorem was the subject of the feature documentary film, Ned Rorem: Word & Music. He won a Pulitzer Prize for his orchestral suite Air Music in 1976.