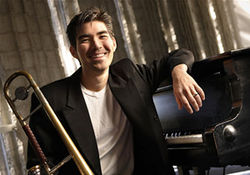 Born in Platteville, Wisconsin, in 1974, Nathan Tanouye began studying music in elementary school, first with piano lessons and later on trombone. At age 11 he moved to Hawaii, where he attended high school and began his college education. While at the University of Hawaii, Manoa, Mr. Tanouye studied trombone with members of the Honolulu Symphony, including Jim Decker and Mike Becker. After receiving a performance scholarship to the University of Nevada, Las Vegas in 1995, Mr. Tanouye moved to Las Vegas and completed his degree in both classical and jazz performance.

As a freelance trombonist, he has performed with artists such as Natalie Cole, Johnny Mathis, Tony Bennett, The Temptations, Luciano Pavarotti, Andrea Bocelli, Donny & Marie Osmond, and Bette Midler. In addition, Mr. Tanouye has been the principal trombonist in the Las Vegas Philharmonic since 1998 and has performed on the Las Vegas Strip in shows such as At the Copa, Storm, Hairspray, and The Producers. Since 2005, Mr. Tanouye has performed and recorded with Las Vegas’ premier horn band, Santa Fe & The Fat City Horns, a 14-piece band for which he also writes and arranges.

As a composer, he has written works for many different sizes of ensembles, ranging from jazz trio to concert band. In February of 2004, the UNLV Wind Orchestra Premiered Three Steps Forward, a piece written by Mr. Tanouye to feature Eric Marienthal, Will Kennedy, Jimmy Haslip, and Russell Ferrante, later recorded and released on the Klavier label. Since that time, Mr. Tanouye has written two more pieces also commissioned by UNLV; Kokopelli’s Dance (2005) and Four Flew Over the Hornet’s Nest (2006). Most recently, he completed Loki's Revenge (2010), commissioned by the Southeastern Conference Band Directors Association.

Mr. Tanouye has also done extensive work as an arranger and orchestrator, including arrangements for a diverse range of ensembles, including 18-piece jazz ensembles and flute and harp duo. One of his biggest arranging credits, “Crossings – The Russ Freeman Project” (Peacock 2006), a collaborative work with Carolyn Freeman featuring the music of pianist Russ Freeman, received rave reviews from the jazz community and helped launch The Las Vegas Jazz Connection, the roaring 26-piece jazz orchestra lead by Mr. Tanouye. Since 2005, Mr. Tanouye has lead the orchestra in numerous concerts featuring his arrangements and compositions. He and the ensemble have recently released their second CD for Peacock entitled “Remembering Russ”, which again features Mr. Tanouye’s arrangements of the great Russ Freeman’s music. Most recently, Mr. Tanouye has done arranging and orchestration work Celine Dion, for whom he also plays trombone.