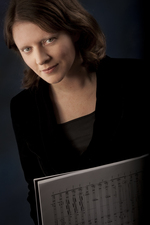 Natalie Williams (b. 1977, Australia) is a composer and educator living permanently in the United States.

Major premieres include a string octet Saudade (2015), commissioned as the first new work for the Hildegard Project, a commissioning project from Musica Viva Australia, supporting women composers in contemporary music.

She is a fully represented composer at the Australian Music Centre, a member of the American Composers Forum and the Australasian Performing Rights Association.

In 2019 Natalie completed a certificate in international cultural diplomacy in Berlin and a graduate certificate in management at the Australian National University. Natalie also serves on the selection committee for the Fulbright U.S. Student Program, and has held board positions with the Society of Composers Inc. and the International Alliance for Women in Music.