My Shepherd Will Supply My Need 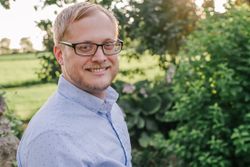 My Shepherd Will Supply My Need is a transcription of a piano solo that was used for Zach and Nicole Staudt and performed at their wedding in May of 2012. The melody was taken from William Walker's Resignation from Southern Harmony. The hymn tune has been used for a variety of texts, but I am most familiar with the text based on Psalm 23. When composing the original piano version, I attempted to create a narrative that reflects a life-story.

The opening bell-like passages evoke the momentous event of a wedding, then each statement of the hymn tune represents different phases of life, beginning simply but growing richer and broader until a moment of hesitation in which the fragment is completed by the tuba solo. The choice of this duet between clarinet and tuba is not arbitrary, as my sister is a clarinetist and by brother-in-law plays the tuba. The work concludes with a variation of the opening bells, but with the hymn tune woven through the texture, overlapping and completing itself.