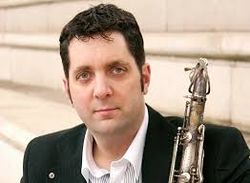 
Narration and backing instrumentation on CD

My Mountain Top was originally written for the Apollo Saxophone Quartet (with accompanying CD) with words and narration by Lemn Sissay. Commissioned by the ISCM World Music Days, the piece was premiered by the ASQ and Lemn at the 1998 ISCM Festival in Manchester, UK.

One of Andy Scott's most performed and recorded pieces, the composer has subsequently arranged it for various instrumentalists. The arrangement for solo soprano or tenor saxophone was created for Gerard McChrystal, who premiered it at Dartington Festival (2001).

All four members of the Apollo Saxophone Quartet composed pieces for the ISCM commission, all loosely based around the seasons. Two pieces were composed after Lemn had written the words, whereas My Mountain Top was one of the other two pieces that were written and then recorded for Lemn to set words to.

Inspired by Summer, My Mountain Top commences with a crackle on the CD, representing lying under the gaze of the sun and feeling the heat on your skin. The rhythmically free opening saxophone statement represents a mind that is active with thoughts but which gradually floats into a semi-conscious state. At this point the warm keyboard pads emerge and the stage is set for Lemn's magical words. The solo saxophone part weaves its way around the voice, gesturing and supporting, but never overpowering.