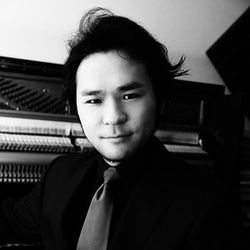 Mutsuhito Ogino (b. 1981, Osaka, Japan) is a Japanese composer and organist.

Mr. Ogino studied composition with Sven-David Sandström and pipe organ performance with Larry Smith at Indiana University. Upon graduation he fulfilled his desire to establish himself simply as "just one musician" in his hometown of Osaka, Japan.

Free of the limitations of artistic labels, he explored diverse musical project. He created the score for a documentary drama, Moon over Manzanar, (2009). In central Osaka he volunteers playing violin in a rose garden. He returned to the reed organ for a series of performances called SOUND GATE, held in a 100-year-old traditional Japanese building. Among his recent releases is an hour-long solo organ work, Lost Land of Cloud Far.