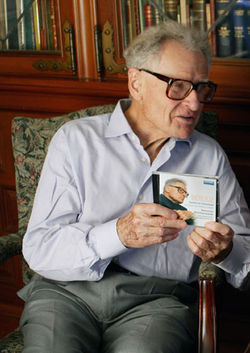 For Music for Winds I was commissioned by a consortium of nine orchestras in four countries (the United States, Germany, Austria, and Japan). The initiator of this project is Dr. Frederick Harris, director of the wind orchestra at MIT in Boston. He knew that I had long since wanted to write a kind of symphony or concerto for winds, or more precisely for symphonic winds, the wind instruments that appear in the symphonies of the nineteenth to twenty-first centuries, from Beethoven to Shostakovich and beyond. The repertoire for the instruments is rather scarce, compared to the great repertoire for strings. I added three saxophones, of which two are less common and less often played, soprano and baritone saxophone. They enrich the wind section by extending the possibilities of sound quality; and to that I brought in percussion, very gently along with piano, celesta, and harp.

The work has four movements, which continue from one to the next without pause. There is a primary theme played at the beginning by clarinet and celesta, and this weaves itself through all four movements, either in its original form or slightly modified. The listener may find the character or tone of the piece to be sad, mysterious, or even tragic. This could be my own reaction to the state of our world, in which great art is slowly disappearing and being replaced by superficial semiculture.

Composed in 2009, this virtuosic four-movement work is surely one of the most important additions to the repertoire of the past fifty years.