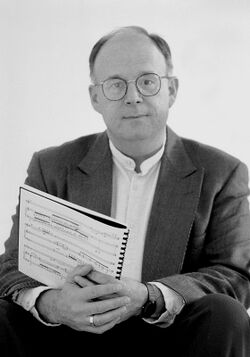 Murray Boren (b. 1950) is an American composer and educator.

Murray Boren received his B.M. and M.A. in composition from Brigham Young University (BYU) in 1975 and 1977, respectively. He received a Doctor of Musical Arts degree in composition from the City University of New York in 2002. Boren began his academic career as department head at the College of Education in Uyo, Nigeria from 1970 to 1980. He became professor of composition and theory at BYU in 1980, a position he held for four years. After this he worked in administrative positions at the City University of New York and New York University from 1984 to 1994. He returned to teach composition and theory at BYU in 1994 where he served as composer in residence until he retired in 2007.

Boren has written nine operas, adapting them from religious texts and The Church of Jesus Christ of Latter-day Saints (LDS Church) history as well as medieval mystery plays. Orson Scott Card was the librettist for Boren's opera Abraham and Isaac based on Genesis 22 in the Bible. Boren also wrote the opera Emma about Emma Smith.

In addition to opera, Boren has written over 100 songs and chamber compositions. He wrote the music for the Joseph Sonnets which were created in co-operation with Sally Taylor. Several of Boren's pieces were first performed by orchestras directed by Kory Katseanes.