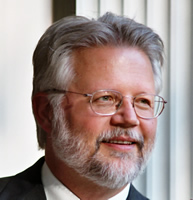 Moving Parts was written during the spring of 2003 for the Randolph High School Wind Ensemble, David Aulenbach, music director. Writing for wind ensemble was a new direction for me since I had previously concentrated my efforts on chamber music, vocal and orchestral composition. What I realized through this work was that the wind ensemble possessed a tremendous dynamic range and color palette. Since there are so many diverse instruments within the three family groups (woodwinds, brass and percussion), it was exhilarating to be able to play with all of the options. This work will certainly be only the first of many compositions for this ensemble.

The title, incidentally, was created by my then-fourteen-year-old son, Mark, who upon hearing it for the first time played on my computer said it sounded like a “bunch of moving parts, like a machine.” With a little editing, Moving Part was born.

The title reflects the energetic and rhythmic mood of the composition, which establishes a feeling of forward momentum while capturing the beautiful and lyrical melodic lines. The opening section filled with driving rhythms and distinct melodies eventually yields to a slower, mesmerizing setting featuring flute, oboe, and clarinet soloists. The piece ends with a colossal buildup to a dramatic pause, followed by a final, fractured statement of the primary rhythmic motive.