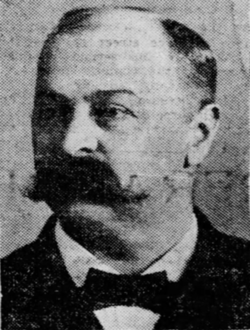 Althouse was the son of Jonathan and Mary Althouse, and spent his youth working with his father on the family farm. He exhibited considerable talent as a youth. His first instrument was the violin, and eventually he gained proficiency on the trombone and baritone horn. He traveled with Buffalo Bill's Wild West Show while in his teens, and one of his early compositions, Always on the Road, was dedicated to that organization.

About 1872, he moved to Reading, Pennsylvania, and was employed in John Yerger's hat factory. During this period he played with the Hampden Cornet Band and the Reading City Cornet Band. Shortly thereafter, he performed as a violinist with the Maennerchor Orchestra and with Albert S. Bowman's orchestra.

In 1880, after a period working as a cigar store operator and working briefly again at the hat factory, he established himself permanently as a professional musician. He performed with virtually all instrumental groups in Reading, including the Philharmonic Orchestra. He organized a pit orchestra for the Reading Academy of Music (now the Rajah Theater) in 1886. He was leader of this orchestra until 1906, and during this time he became acquainted with many famous entertainers who performed there. He met John Philip Sousa when Sousa was with one of the shows passing through Reading, and the two became lifelong friends.

Althouse resigned from the Ringgold Band in 1887 to organize the Germania Band, and he was named leader. Because of its excellence, this band became very popular in the area. After the Ringgold Band's leader died in 1900, Althouse was named to replace him. Althouse was leader of the Ringgold Band until his retirement in 1922, and he also conducted the Germania Orchestra until 1919. During his farewell concert with the Ringgold Band, one of the band's officers read a telegram from Sousa in which he paid tribute to Althouse's genius. The last number Althouse conducted was, fittingly, Sousa's The Stars and Stripes Forever. Since that time, the band has had a fine tradition; their concerts always include at least one Althouse march.

From 1895 to1901, he was partner in a music business with James S. Althouse. Their firm also published music, mostly the music of composers living in that part of the country.

It is difficult to say whether the fame of Monroe Althouse stems more from his long leadership of the famous Ringgold Band or from the many marches he composed. Althouse's marches are considered by some march connoisseurs to be among the finest "street" marches ever written. Compared to the marches of Sousa, Blankenburg, Ricketts (Alford) and other greats, his are simple in structure. The percussion is especially important in Althouse's marches.

Many of his marches are still being sold by the Ringgold Band. Counting the music written for other than band, his works number over 150.