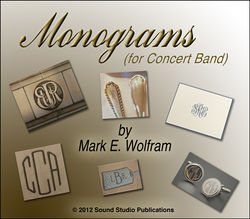 Monograms is an original concert work for band, the title of which refers to the initials of people associated with its creation, most prominently Dr. Earl C. Benson (to whom the work is dedicated).

Monograms is a serial composition that's accessible and enjoyable to all audiences, not just theorists and composers. After working extensively with a tone row the composer chose more freedom to develop the material than a strict adherence to 12-tone technique was providing. The Main Theme (using the original row as a basis) is warm and brooding with rich sonority. The harmonization of this theme is based in 4th and 5th structures and some jazz voicings - the foundation for the composition.

The work has two main sections. The first section (slow tempo) deals with the Main Theme in its original form. The section then becomes more rhythmic in the Double Reeds and Clarinets, accelerating gradually while expressive Alto Saxophone and Trumpet solos play over a resounding French Horn, Euphonium and Tuba motif. After further development the slow section ends with the French Horns, Euphonium and Tuba reharmonizing the original "E-C-B" monogram, answered subtly by the Woodwinds.

The second section (fast tempo) begins with a cascade of the "E-C-B" monogram moving sequentially from upper to lower Brass followed by an ascending scale in the Woodwinds as the Brass and Suspended Cymbal crescendo. The Low Brass and Percussion then set up the rhythm for the second half of the piece. The Fast Theme in the Clarinets uses rhythmic and scale motifs which are an outgrowth of the Main Theme. After much development of the themes there are a few beats of silence which set up the final presentation of the themes. In this, the fullest and busiest section of the work, several elements are presented simultaneously, built around the Trumpets' and Trombones' rhythmically augmented statement of the Main Theme. In one last monogram statement, followed by a Percussion lead into a final pyramiding section (almost the opposite of the cascade which started the fast section) the work slows and crescendos as the harmonies build upon each other. In a final call, the Brass, Saxophones and Percussion proclaim the tri-tone interval, while the Woodwind trills grow in intensity to a resounding final chord.