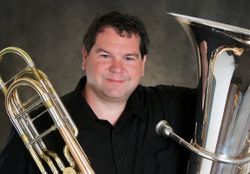 Mike Forbes (b. 1973) is an American tubist, composer and educator.

Staff Sergeant Forbes began his career as a tubist with the U.S. Army Band, "Pershing’s Own" and subsequently served on the music faculties at universities along the East Coast and in the Midwest. Recently, he has been in high demand in Iberia as the Guest Tuba Lecturer at the Superior Conservatories in Malaga (Spain), Porto (Portugal), at the international music festivals in Salceda (Spain) and Alcobaça (Portugal). Adding to his Spanish-speaking residencies, he lectured at the "Wind & Song" brass festival at the San Juan Music Conservatory in Puerto Rico last summer. In 2015-16 he will present clinics, masterclasses, and concerts internationally in Portugal ("Gravissimo" in Alcobaça) , Austria (Salzburg), and Italy (Bologna).

Mike Forbes can be heard on his two solo albums, Forbes Plays Koetsier (Summit Records) where he features all seven works for solo tuba by Dutch composer, Jan Koetsier; and his recently released Forbes Plays Forbes featuring his own compositions for tuba, He has recently been a featured tubist with the Guy's All Star Shoe band on A Prairie Home Companion with Garrison Keiller and also gave the first ever solo tuba recital on Wisconsin Public Radio’s popular broadcast, Live from the Chazen.

As the founder of the Isthmus Brass and Sotto Voce, Forbes regularly performs and records throughout the Midwest on both the tuba and the bass trombone. He is the Principal Tubist with the La Crosse and Manitowoc Symphonies and has recently performed with the Porto Symphony (Portugal), Madison Symphony, and Wisconsin Chamber Orchestra. He also has performed as principal tuba with the Milwaukee based Starry Nights Summer Festival Orchestra, as well as the Aspen, Chautauqua, and Hot Springs Music Festival orchestras.

An extremely prolific chamber musician, Forbes has founded the Isthmus Brass and the Isthmus Brass Quintet . He has also co-founded The Wild Trio with hornist Charles Tibbetts and is a co-founder of the Sotto Voce Quartet, America’s premiere tuba/euphonium quartet.