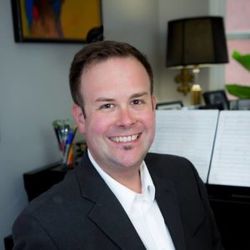 In June 2012 I received sad news that my dear friend George Buckbee had passed away unexpectedly at his home near Helsinki, Finland. Despite living on different continents for most of our friendship, George and I had nonetheless maintained a lively and stimulating correspondence since we met in the late 1990s when I was an undergraduate and he was emeritus professor and dean at the Conservatory of Music at the University of the Pacific. George was also a tireless promoter of my work: he commissioned two pieces from me and frequently passed along my scores to European musicians. It was significant that he left this world during the midsummer celebrations, a special time of year in his adopted Scandinavian homeland. George often sent vivid descriptions of these festive times with family and friends.

It was during this difficult and sad time that I was also beginning to think about this commission from Bill Staub and others, and I decided to make the piece more personally meaningful by honoring George’s memory.

As the title suggests, characteristics of the pavane, a moderately slow Renaissance dance sometimes associated with mourning, pervade the work. This includes the stately long-short-short rhythmic pattern heard frequently in the drums, and the paired but varied statements of melodic ideas. The work opens with a dirge over a descending bass line (another musical trope representing grief), followed by a short trumpet fanfare. The main body of the piece is made up of a simple, cantabile tune heard in first in F and later in G-flat. The music then returns to F and ends with quiet, improvised percussion figures that slowly dissipate into nothingness.