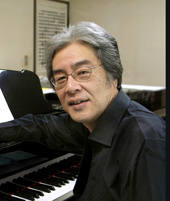 Michio Kitazume (b. 1948, Japan) is a Japanese composer, pedagogue and conductor.

Kitazume studied composition, piano, and conducting at the Tokyo National University of Fine Arts and Music, completing graduate studies there in 1974.

As a composer, Kitazume works in various genres, including orchestra, wind ensemble, and vocal and chamber music. In 1977 he became a member of a cooperative group of musicians and composers "Ensemble Vent d'Orient". This group won the 1st Kenzo Nakajima Contemporary Music Prize in 1983. In 1994 he was awarded the Otaka Prize. In 2004 he won as a composer again after 22 Nakajima Kenzo Music Prize. He is chairman of the Japan Society for Contemporary Music.

He was a music educator attached to the Kunitachi College of Music in Tokyo, at the Aichi Prefectural University of Fine Arts and Music in Nagakute in the prefecture of Aichi and visiting professor at the Tokyo College of Music .