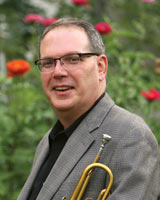 Michael Kamuf (b. 11 July 1967) is an American composer, arranger, educator and trumpeter.

Mr. Kamuf holds Bachelor of Music degrees in both jazz performance and music education from the Dana School of Music at Youngstown (Ohio) State University and a Master of Arts degree in instrumental conducting from George Mason University (Fairfax, Va.).

Mike’s compositions and arrangements have been performed by numerous jazz artists and ensembles including the Woody Herman and Glenn Miller Orchestras, the USAF Airmen of Note, James Moody, Eddie Daniels, Sean Jones, Terell Stafford, Bill Watrous and Nick Brignola to name a few. Mike is an exclusive writer for the Belwin Division of Alfred Music Publishing with titles in the jazz, string orchestra and concert band catalogs. He also has compositions for jazz ensemble published by UNC Jazz Press, the Neil A. Kjos Music and the FJH Music Company.

Mike has performed with the Woody Herman and Tommy Dorsey Orchestras and has recorded as a member of the Alan Baylock Jazz Orchestra. He served as assistant principal trumpet of the Youngstown Symphony Orchestra under Maestro David Effron from 1990-92. Currently, Mike leads his own jazz octet comprised of outstanding musicians from the Baltimore and Washington DC areas.

Mike has taught instrumental music for Montgomery County (Maryland) Public Schools (MCPS) since the fall of 1992. He has been in his current teaching position since 1995 as the director of bands and orchestras and music department chairperson at John T. Baker Middle School (Damascus, Md.). Under his direction, the Baker ensembles consistently receive high ratings at music festivals and have commissioned four works for young concert bands. In 2007, Mike received the Superintendent’s Above and Beyond the Call of Duty (ABCD) Award for his efforts in involving students in the commissioning process and has directed MCPS’s Senior Honors Jazz Band and Junior Honors Band. He has served as a jazz faculty member at Youngstown State University and Montgomery College (Rockville, Md.). Mike has become an in-demand arranger, clinician and adjudicator for schools, conferences and music festivals across the country.